YogOdysseus woke up on the morning of the day of Labors with a feeling of anxiety brought about by deeply disturbing dreams of car wrecks and social shame. These anxiety attacks are not, per se, part of the Odyssey that soon ensued, but an important fact about our hero. For he wakes up many mornings with these feelings which he buries under the mask of wit and strength.

This day however was unusual for YogOdysseus had decided to embark on an Odyssey to far away yoga studios. The previous day he had celebrated the day of free yoga opening ceremony where he practiced in the shady courtyard of the Whole Foods terrace. Surrounded by the Yogis of his homeland he was astounded at the beauty of forms and the wonder of practicing on the cool stone with the high billowing clouds. Focusing on a far away airplane in tree pose, or the beauty of expression that enfolded.

THE TEMPLE IN THE HILLS 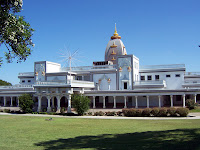 This morning YogOdysseus set out to a place south of Austin near the edge of his homeland. He passed over the Barton Creek basin through mists of the morning rain and into territory where pickups and men with red necks is more common. There in the hill country he was astounded to see a four story spire rising from the base of a Hindu temple. Peaceful people from the area gave him a ride on a golf cart from the temple to a spacious yoga studio nearby. On the golf cart ride over the lady informed me that the temple and the Barsana Dham Ancient Yoga Center had been built in four years, from concept to reality.

YogOdysseus was greeted by two of his classmates, tall amazon warriors who radiated joy from across the room which was filled with strangers with varying levels of expertise. He began his practice and felt his morning anxiety drift away and the mask soon became reality as asana worked it’s magic.

YogOdysseus was particularly impressed with a man who had never done yoga. His postures were all crooked, his leg was unaligned…yet the man had a smile and ease that takes some people a lifetime to acquire.

After practice he met and talked with Chris Dionsi, the teacher. One of the amazons amazed them all by shooting golden light from her chest. Following this beacon they explored the grounds, the pond, the playful Krishna frescos and the open arena which is great for practice of martial arts and yoga. 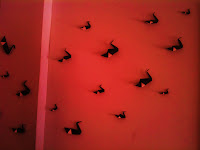 YogOdysseus departed the temple and headed back into town dining on nuts and lembas. Parking at Whole Foods he walked through the HOT Texas sun to Black Swan Yoga. He was greeted by his one time teacher and all time friend who engaged in an intense “sweaty Yoga” class . The sirens of Black Swan yoga practice a fiery form of Asana. The room quickly heated as sun salutations turned to intense thigh burning lunges and balance postures. Heat from the vents buffeted the pair of practitioners moved through each move, dripping sweat, brushing on sun salutations and loving every moment of life.

THE FLOW OF SEVA

After practice YogOdysseus and his companion walked through the REFRESHING

Texas weather to have a bittersweet smoothie and bond in Kula Yogic Gossipy Soul Sharing. They then journeyed to Seva Yoga. As he gazed across the parking lot he was already struck by the diversity of studios and styles. From the exotic temple hatha, to the Indie minimilism hot yoga and now a classic Austin strip mall containing a simple giant room with cool tile. The Twila began a restoritive Hatha flow. There could not have been a greater contrast to the Sweaty Hot Black Yoga where the warmup was sun salutations in a hundred degree room. After a few smooth arm rotations from a seated position the teacher announced “OK, the hard part is over”. We layed back on the floor and gently rotated our hips in gentle hip openers and twists. 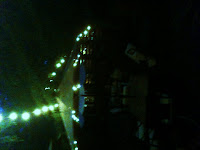 YogOdysseus then set out to Casa De Luz where there was a Stomp Yoga planned. Upon arrival he discovered there was no stomping, and that the yoga teacher was “running late”. Taking advantage of this interlude he had two bowls of the Casa’s legendary biotic soup which invigorated him greatly.

He joined a group of practitioners who sat bewildered in the kitchen, when a flustered teacher bounced into the room. After a few moments of confusion about rooms, class and other things, she sat down in a state of dishevelment and began to explain how hers was the “traditional” yoga with many benefits to mind and body. She then had the class sign waivers and embarked upon very simple practice suitable for someone undergoing triple bypass surgery. What the waiver was for remains a mystery forYogOdysseus was in more danger from the bittersweet smoothie than this practice. Although it did test his compassion and patience. YogOdysseus put his best face forward, but inside was deeply disappointed at the lack of stomping and yearned to “connect, stretch and laugh” as was advertised.

LOVE CHANTING AT THE COOP

He was soon to be redeemed however as he made his way to the Co Op of Love and Yoga to practice a late night Kirtan class with a group of hippy looking smiling people. Their chants filled the night air with bliss and harmony. This studio, the only one YogOdysseus had been to previously, was cozy and intimate and beamed with the power of love and harmony.

As he stepped out into the moonlight, he gazed through the darkness at the courtyard. A giant tree whose roots run deep give the area a pranic feel that made YogOdysseus long to practice and teach Tai Chi beneath it.

He headed home, gazing occasionally at the starlit clouds that were thickening. Perhaps the next morning he would awaken refreshed, or yet again find the fear of life which we all experience. Yet today had made him stronger, happier and at that moment, he knew….peace.
Posted by Thomas Vinson at 9:37 PM 0 comments